29 July 2022
Depart: Gloucester, MA anchorage 10:05
Arrive: Kittery, ME anchorage 2:30 - 4:00
Distance: 40 nm
Late start today while Clark reset the parameters for regulating the battery charge on the new battery bank. He hoped to get a call back from customer support to assist with the configuring of the data. By 10:00 he decided that he was not going to get a call, and we should leave. Later, as we motored along he saw he had a missed call from Illinois but had no success trying to reach someone calling back.
Clark said it would be a short travel day today - only 40 nm which translates into 5 hours piloting time. As we travel through Massachusetts towards New Hampshire and Maine, I feel like I am on the boat tour of NE lighthouses. The history here is amazing, and a lot of the lighthouses have an interesting history.
Our first lighthouse pictures for today are of the Cape Ann, Thacher Island, Lighthouse twins. Depending of the angle of the boat to the lighthouses, it appeared to be 1 or 2 at differing distances apart. 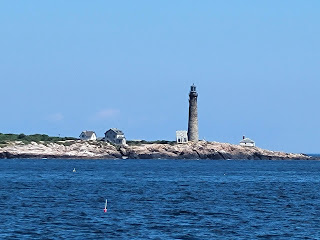 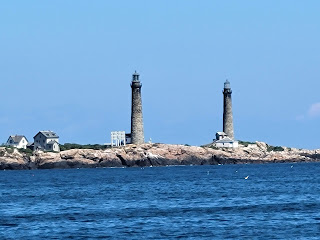 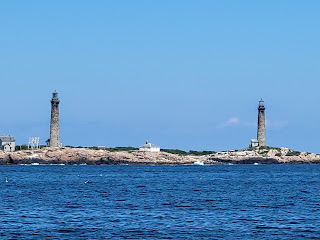 We saw some tall object poking up out of the water. "What's that!?"
The next lighthouse we passed was the "Isle of Shoals" Lighthouse. This is actually a set of islands close together.
We got out into deep water today, so the shoreline was too far away for sightseeing.

The next lighthouse on today's tour was the Whaleback Light Lighthouse. 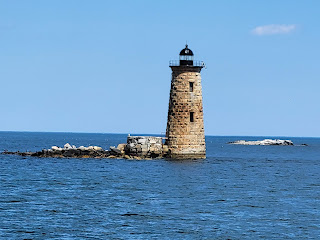 As we entered Portsmouth, NH harbor, we passed a number of forts. Interesting to note that the waterway here divides New Hampshire from Maine, so if we drifted from port to starboard, we crossed the state line. 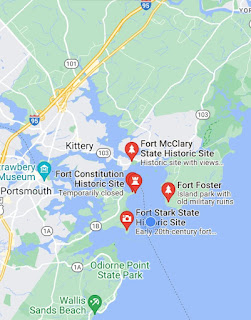 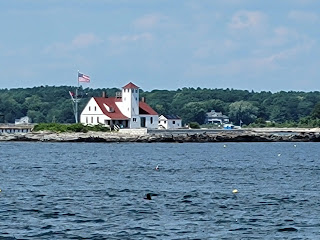 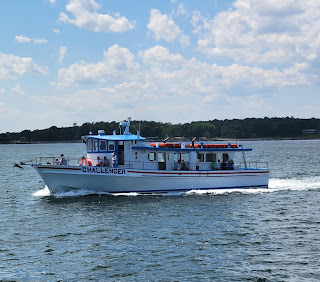 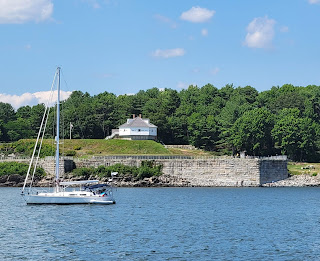 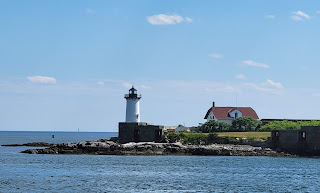 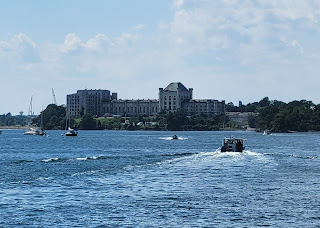 It took us one-and-a-half hours to drop anchor. We tried to anchor by Fort McClary, but Clark thought we were too close to pots, mooring balls, and other boats. After trying twice to get situated, Clark decided we should try a different location to drop anchor. That turned out to be worse, so Clark thought maybe we should grab a mooring ball. He called around and found no place that could take us. So, after all that, I convinced him to go back to the first spot and try again.
As Clark struggled to find a spot to drop anchor, the harbormaster came by on his boat and pointed Clark to a place that would accommodate us. He said a 180' boat dropped anchor there last week, so we should have no issues. I could tell Clark was not convinced, but we were out of options. It all worked out well, we did not drag anchor and we did not hit anything around us throughout the night.
After finally dropping anchor in the afternoon, Clark tried once more to contact a support person. He was successful, but the person he talked to admitted he did not know how to address Clark's problem. He said he would try to get another, more-experienced person to assist. Clark never got a call back before they closed for the weekend at 6:00 ET.
30 July 2022
Depart: Kittery, ME anchorage 9:20
Arrive: Portland ME anchorage 3:40
Distance: 49 nm
Planning on a relatively short trip for today, only 50 nm, we had a relaxed start to the day. Having researched the battery problem, he decided he had an idea of how to reconfigure the parameters for the battery. After he reset them, he was much happier.
As we prepared to leave this morning, a canon boomed nearby. I yelled, "We're under attack!" About every 10 minutes, or so, Fort McClary would fire their canon. Perhaps this is a special event for a Saturday?
To get underway, we had to pass through the pot maze. It is definitely challenging. 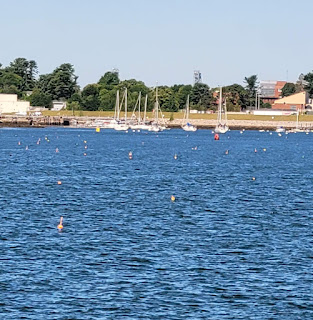 I read on a boater's forum that the way you know how to pass a pot is to look at the marker. It will point to the side your vessel should pass on. Cool!
We did see 2 somethings briefly swimming in the water in front of our boat today. Although we did not get a close look, we both thought it was a pair of sharks! 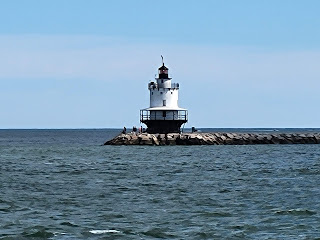 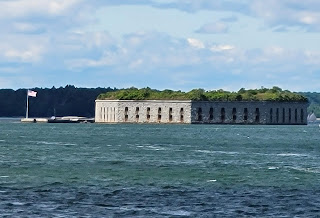 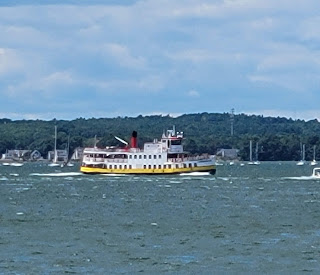 Once again we went shopping for an anchorage. We looked at anchoring near a marina with a bunch of big boats and sailboats nearby, but decided we didn't like the space available. 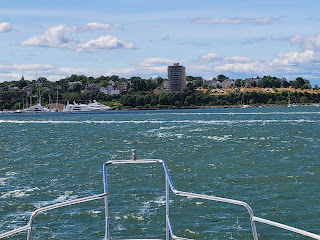 Then we dropped anchor in front of the Spring Point Ledge Lighthouse in Simonton Cove. 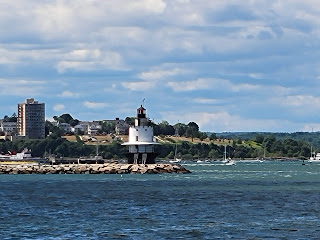 Posted by Evelyn Woodworth at 4:24 PM No comments:

28 July 2022
Depart: Danvers Mass Private Dock 11:15
Pump out stop: depart 12:00
Arrive: Gloucester anchorage 2:25
Distance: 17 nm
Clark was up early this morning. He got to see a pretty view of the sun hitting the houses nearby. 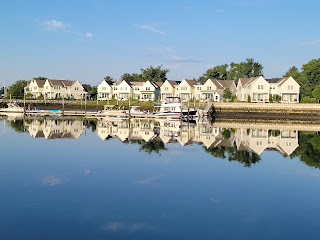 Even though we were up early, we got a very late start leaving the dock today and decided to make it a short trip to Gloucester (pronounced Glahsta here) instead of a longer trip to Portsmouth. Before we left this morning, Ev did household chores like running the vacuum and doing a couple of loads of laundry. Clark had to take our old batteries to the store to get a refund for the cores and then return the car to his cousin. He needed to reprogram the controls for the batteries since they are a different brand than the prior ones. The change impacted the solar MPPT controller, the battery charger, and the 3-stage regulators for the alternators. He needed to contact the manufacturer to get the specifications.
He also filled the water tank. We desperately needed to empty the holding tank. Our friend, whose dock we were staying at, told us to call the Danvers Pump-out boat on Channel 9, and they would come right to the dock. When Clark called them, they refused to come because we did not have a mooring permit for pump outs. Clark was flabbergasted! In New Jersey they are anxious to pump out boats to protect the environment. Since those were the rules, we had to find a place that would do the dirty job. Luckily, Danversport Marina, a short distance away, said we could come there. The tank was at 75% full - way over our normal limit.
Fortunately, their pump-out machine worked well and quickly. When the job was completed, our meter read 3% full as there is always some residual that won't come out via the suction. Yay! We can use the head without worries for a while now.
By the time we completed all our jobs, it was already noon and time to make lunch. As soon as we were headed on our way, I got that job done as well.
The ride to Gloucester provided lots of opportunities to use the camera on our phones.  Here are the sights we saw today.
Longfellow wrote a fictional poem called "The Wreck of the Hesperus".  Supposedly it is based on "Norman's Woe" rock which was the site of many shipwrecks as the rock is mostly submerged at high tide. 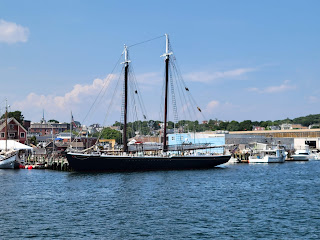 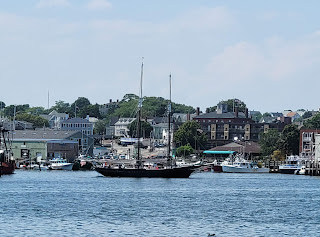 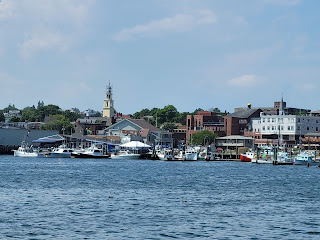 Finding a place to drop anchor here was not easy. Much of the space is taken up either by mooring balls or by traps. We finally found a place and dropped anchor in 30 feet of water. We found nothing shallower. The tide change here is about 10 feet. It makes figuring out how much line to put out interesting.
Clark was napping on the sofa, and I was watching the evening news when suddenly it smelled like something was burning. That got Clark up in a hurry -- where me calling him earlier had no effect! He checked our boat - first the new batteries and then other places and found no issues. We then heard an engine vrooming and figured out the stink was coming from the USCG boat picking up a mooring nearby.

Posted by Evelyn Woodworth at 10:09 PM No comments:

For more info on the Great Loop